We had a great time lounging with the vegetables today. First potato harvest, 'Yukon Golds' and 'Fingerlings', average yields, but look tasty. In the morning, there was slight tension in the team over determining which kohlrabi in the Little Mountain gardens was best. I submit the following image as evidence for my choice (regrettably, it does not do it justice): 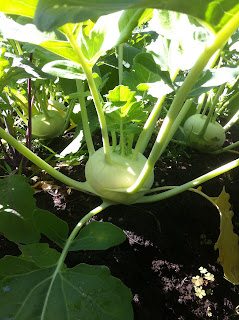 I'll let Andrew post an image of his candidate and we can let the impartiality of the interweb have final say...

Here's what you can expect in your box on Sunday afternoon: 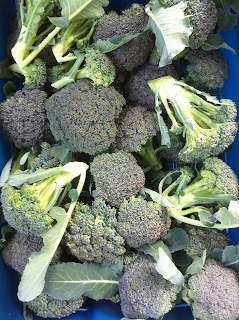 This broccoli has an evenly domed shaped and compact head.

Full of flavour and very versatile. 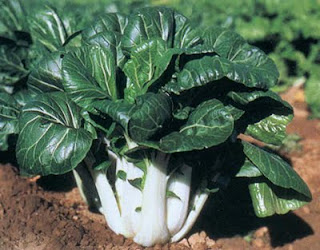 Has a light, sweet flavor, crisp texture and high in vitamin A, vitamin C and calcium.

Typically referred to as a green onion, these scallions have dark green

leaves and tall, straight stems that do not bulb.

This variety of Kohlrabi is slightly faster growing than it’s purple counterpart,

and some say slightly sweeter tasting and more tender.

and grind rock salt over top, PBR! (Praise the BRassicas). Treat the greens like kale.

These mild and sweet flavoured turnips are nearly round and smooth.

They have a bright purple tops, and are a creamy white colour in the lower portion.

Hybrid vigour really shows in this Scottish kale. Plants are very tall and
extremely productive with thick, very curly, ruffled, blue-green leaves. When small,
it allows for multiple pickings for salads. Later, the large plant handles winter well.
This is our most frost hardy variety.

flesh that retains its colour when cooked. An excellent choice for baking, boiling, 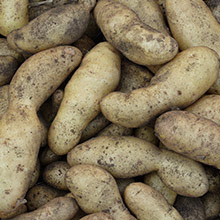 From the Baltic region of Europe/Asia. Has a yellow banana shape with a slightly
waxy, firm texture. Bake, boil or steam.

A blend of white, red and purple skinned radishes. All varieties have a crisp and

This Daikon radish is very popular in Japanese cuisine. The large, mild flavoured

roots are perfect for stir-fries and salads, as well as pickling.

This beet relative is a good source of beta-carotene, vitamin C, iron and calcium. 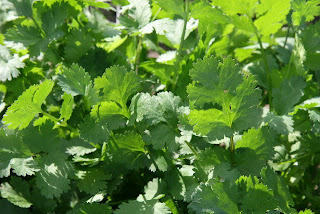 Also known as Coriander, Yuen sai or Pak chee, it is a controversial member

of the Apiaceae family. The controversy in not a matter of phylogenetics but

culinary sense. Here is a great NY Times article on the subject, which begins

with a notable conversation between Larry King and Julia Child:

"In a television interview in 2002, Larry King asked Julia Child which foods she hated. She responded:

“Cilantro and arugula I don’t like at all. They’re both green herbs, they have kind of a dead taste to me.”

“So you would never order it?” Mr. King asked.

“Never,” she responded. “I would pick it out if I saw it and throw it on the floor.”

As comestibles, they are both dead to me as well, Julia. But as a plant in the garden, cilantro is great. Most cultivated plants in the Apiaceae family, aka Umbelliferae, are known for attracting beneficial insects, which prey on insect pests on nearby plants. Right now, our fennel and dill plants (same family) are official Lady Bug Love Hotels, no vacancy signs all lit up...